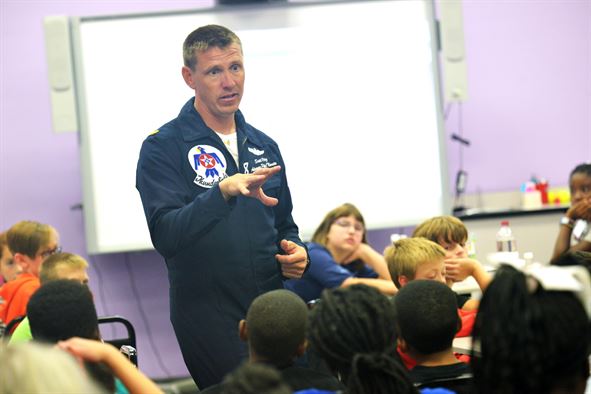 ROBINS AIR FORCE BASE, Ga. — Maj. Scott Petz, pilot of the No. 8 Thunderbird jet, met with STARBASE students at the Museum of Aviation Sept. 29. STARBASE ROBINS is a Department of Defense program which mentors children in Science, Technology, Engineering and Math. Petz’s mission was to inspire the fifth graders to not only become Air Force pilots but to study math and science because those are the driving forces in a pilot’s life. “Math is extremely important,” he said. He asked the students math and science questions about G-force and its effects on the human body. Students asked about combatting the G-force as well as if he’d witnessed crashes.

Petz has spent more than 2,000 hours in the F-16, the jet the Thunderbirds fly. It takes dedication, training and trust to be able to do the maneuvers. “We fly 3 to 5 feet from an aircraft going about 500 to 600 mph. That all goes back to training,” Petz said. Maj. Nick Krajicek spoke to Jr. ROTC cadets on Friday morning at the museum during Tuskegee Airman Education Day.

He said the goal of the Thunderbirds was to inspire people to want to serve their country. “Less than 1 percent of the population raises their hand to serve,” Krajicek said. He also encouraged the students to hold on to their dreams and not take no for an answer. Krajicek enlisted with the Army when he was 17 and became an infantryman. While there, he was in college and decided he wanted to be a helicopter pilot. He flew the UH-60 Blackhawks. During a mission supporting the Air Force, he decided he wanted to fly jets, and in 2004, he made that dream come true.

One of the Thunderbird maintainers, Tech. Sgt. Conrad Nelson, was asked about his favorite part of the show. Nelson got emotional talking about how the Thunderbirds dedicate each one of the shows to a fallen warrior. The family is invited to see the jet, and it lets them know we haven’t forgotten about their son or daughter who paid the ultimate sacrifice, he said.